The Soul of Basketball 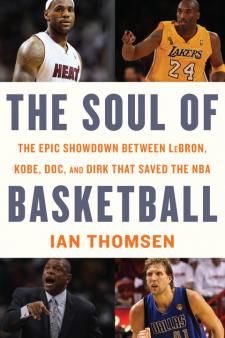 “A fascinating, thorough look at pro basketball’s continuing evolution to becoming the ‘sport of the American Dream.’”—Publishers Weekly   The Soul of Basketball tells the story of an NBA prodigy, his league, and their sport in the throes of crisis during the pivotal 2010-11 season. It began with The Decision, that infamous televised moment when uber-star LeBron James revealed that he was leaving the Cleveland Cavaliers—thereby distancing himself from his role model Michael Jordan—to pursue his first championship with his former opponents on the Miami Heat. To the great fortune of LeBron, the NBA, and basketball itself, the mission didn’t work out as planned. In this book, veteran NBA writer Ian Thomsen portrays the NBA as a self-correcting society in which young LeBron is forced to absorb hard truths inflicted by his rivals Kobe Bryant, Doc Rivers, and Dirk Nowitzki, in addition to lessons set forth by Pat Riley, Gregg Popovich, Larry Bird, David Stern, Joey Crawford, and many more.   Brimming with inside access, The Soul of Basketball tells the inspiring story of LeBron’s loneliest year, insecure and uncertain, when his ultimate foe was an unlikely immigrant who renewed the American game’s ideals. From Miami to Boston, Los Angeles to Dallas, Germany to the NBA’s Manhattan headquarters, the biggest names in basketball are driven by something more valuable than money and fame—a quest that would pave the way for Stephen Curry, Kevin Durant, and future generations to thrive.   “Ian Thomsen provides an antidote to the fast-food, twitter feed of instant information consumption…deft prose and snappy anecdotes…Great, great stuff.”—Leigh Montville, New York Times-bestselling author of Sting Like a Bee   “A fine work of sports journalism.”—Kirkus Reviews (starred review)