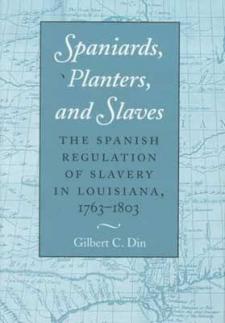 Spaniards, Planters, and Slaves is a provocative look at the institution of slavery and its function as a part of Louisiana's culture during the years of Spanish rule. Gilbert C. Din challenges the idea that conditions under the Spaniards differed little from the years of French rule and examines how local culture merged with colonial government and residual laws to create a slave system unlike any other in the Deep South.

Din presents many aspects of the slavery issue, including a look at the French system, conflicts between planters who favored the established system and governors who promoted the less stringent Spanish laws, and the political favoritism that sought to benefit the wealthy New Orleans district. Din also discusses the role of the Catholic Church.

Using government documents from archives in Spain and Louisiana, Din paints a historically accurate portrait of a time when the blended culture of the eighteenth-century colony resulted in conflict and turmoil. Most important are the Papeles Procedentes de la Isla de Cuba, a collection of colonial documents which illustrate not only the actions but also the personalities of the governors and how they implemented changes and handled problems within the slave system.

Spaniards, Planters, and Slaves is the first in its field to capture the years of Spanish rule as a specific and unique point in Louisiana's history of slavery. Din's research uncovers both the complexities of the slavery issue and the Spanish heritage that ultimately helped to shape the slave system of the future state. It is an ideal study for anyone interested in the history of both colonial Louisiana and slavery itself.