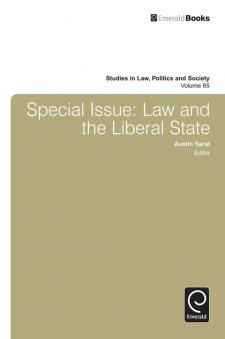 This special issue of Studies in Law, Politics and Society focuses on law and the liberal state; presenting an interdisciplinary and multifaceted approach to analysis of law and liberty. The first chapters focus on law's direct relationship with the American liberal state. John P. Anderson defends John Rawl's pragmatism; Adelaide Villmoare and Peter Stillman consider the 'Janus faces of law', a double vision of law where both sides of the face adhere to one another through neoliberalism; and Timothy Delaune examines jury nullification. The remaining chapters then go on to consider specific applications of the law within society. Susan Burgess provides a critical account of what implications the inclusion of gays in the US military has for understanding the means by which the liberal state uses law to include the previously excluded. Daniel Skinner then problematizes the body politics of American liberalism, as viewed through the lens of health policy and the final chapter from Beau Breslin and Katherine Cavanaugh explores how various legal and judicial policies have highlighted the clash between the state's imperial authority and Native American narratives.