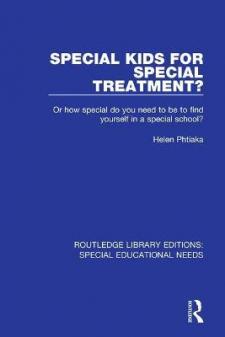 First published in 1997. This book compares and contrasts the experiences of deviant pupils in a mainstream school with that of those in a special unit for pupils with behavioural problems. The author's aims are to (i) evaluate the differences between the behaviour of deviant boys and girls within the mainstream education system with those without; and (ii) justify the criteria for transferring deviant pupils to special units.

Her research shows that there is no uniformity in the deviant behaviour of pupils in either situation. In fact, there are more similarities in the behaviour of pupils across the dividing line than pupils in the same institution. Such findings raise questions about the apparent arbitrary nature if some transferral decisions and, in the longer term, the whole logic of separate schooling for pupils who are considered by some to be a problem.

At a time when market forces and competition have distracted the schools' attention away from the needs of the individual pupil, this book stresses the need for changes at all levels which will make school relevant to the lives of all pupils.