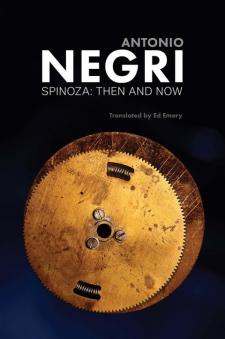 This third and final volume of the series of writings by Antonio Negri examines how Spinoza’s thought constitutes a radical break with past ideas and an essential tool for envisaging a form of politics beyond capitalism.

Negri shows how Spinoza’s ideas have facilitated radical renewal from their beginnings to the present day. It was the democratic freedoms and spirit of solidarity fostered in The Netherlands of the 17th century that allowed Spinoza to develop a radically new form of thought, redefining notions of the state and outlining a republican alternative to absolutist monarchy. In our own era, Negri argues that the rediscovery of Spinoza was critical in reinvigorating political theory. Instead of acquiescing to the economic order of capitalism and abandoning the class struggle, Spinoza’s ideas enable us to reconstruct a revolutionary perspective. His treatment of concepts such as multitude, necessity, and liberty have given us new ways of looking critically at our present, revealing that power must always be seen as a question of antagonism and class struggle.

The writings that make up this volume - some written from prison as Negri fought for his own freedom - provide an important account of the enduring relevance of Spinoza’s thought. It will be of great interest to students and scholars of philosophy and political theory, as well anyone interested in radical politics today.