The Spirit of America - The Original Classic Edition 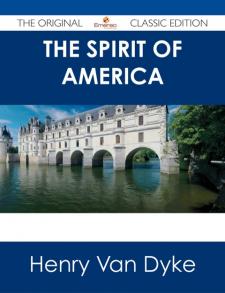 Finally available, a high quality book of the original classic edition of The Spirit of America. It was previously published by other bona fide publishers, and is now, after many years, back in print.

This is a new and freshly published edition of this culturally important work by Henry Van Dyke, which is now, at last, again available to you.

Get the PDF and EPUB NOW as well. Included in your purchase you have The Spirit of America in EPUB AND PDF format to read on any tablet, eReader, desktop, laptop or smartphone simultaneous - Get it NOW.

Enjoy this classic work today. These selected paragraphs distill the contents and give you a quick look inside The Spirit of America:

Look inside the book: A family residence of two hundred and fifty years in America, whither my ancestors came from Holland in 1652; a working life of thirty years which has taken me among all sorts and conditions of men, in almost all the states of the Union from Maine to Florida and from New York to California; a personal acquaintance with all the Presidents except one since Lincoln; a friendship with many woodsmen, hunters, and fishermen in the forests where I spend the summers; an entirePg xiv independence of any kind of political, ecclesiastical, or academic partisanship; and some familiarity with American literature, its origins, and its historical relations,—these are all the claims that I can make to your attention.

...It is when we are seriously interrogated about the prospect of a hereditary nobility in America, created from the descendants of railway princes, oil magnates, and iron dukes; or when we are questioned as to the probability that the next President, or the one after the next, may assume an imperial state and crown, or perhaps that he may abolish the Constitution and establish communism; or when we are asked whether the Germans, or the Irish, or the Scandinavians, or the Jews are going to dominate the United States in the twentieth century; or when we are told that the industrial and commercial forces which created the republic are no longer coöperant but divisive, and that the nation must inevitably split into severalPg 16 fragments, more or less hostile, but certainly rival; it is when such questions are gravely asked, that we begin to feel that there are some grave misconceptions, or at least that there is something important lacking, in the current notion of how America came into being and what America really is.

About Henry Van Dyke, the Author: Furthermore, the lyrics of a song — entitled 'Time', sung by Mark Masri — are mostly inspired by the following quote, written by Henry van Dyke: 'Time is too slow for those who wait, too swift for those who fear, too long for those who grieve, too short for those who rejoice, but for those who love — time is eternity'.