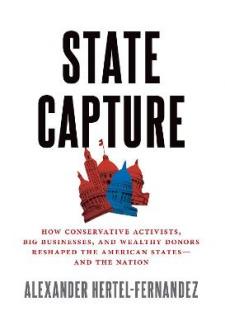 Using a diverse array of original evidence, State Capture explains why and how conservatives developed cross-state political clout while progressives did not.

Most Americans pay little attention to the massive number of elections that occur at the state level every year. Yet cumulatively, a party's success in state-level races across the country can produce major shifts in policymaking and governance. That is precisely what has happened in the US since 2010. In a wave election that year, the Republican Party began their ascendancy in state-level elections, and by 2016 had solidified their dominance. The party now fully controls 25 state legislatures
and governorships-one of the largest advantages either party has had since the New Deal.

After the GOP wave, a broad swathe of states began considering and enacting a near-identical set of conservative priorities-often even using the exact same text. Where did this flood of new legislation come from? How did so many states arrive at the same proposals at precisely the same time? As Alexander Hertel-Fernandez shows in the eye-opening State Capture, the answer can be found in a trio of powerful interest groups: the Koch Brothers-run Americans for Prosperity (AFP), the
American Legislative Exchange Council (ALEC), and the State Policy Network (SPN). Drawing from an impressive evidence base, Hertel-Fernandez explains how, since the 1970s, conservative activists, wealthy donors, and big businesses constructed a right-wing "troika" of overlapping and influential lobbying groups.

But it is about more than this. It also teases out how conservative-corporate mobilization has fostered epochal shifts in the American political economy: the decline of unions, party polarization, and the skyrocketing concentration of wealth. State Capture will be essential reading for anyone interested in understanding contemporary American politics.