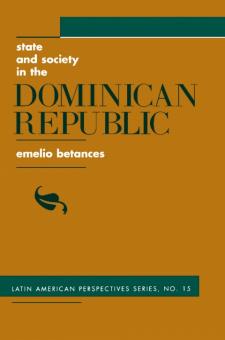 This book offers an analysis of the formation of the Dominican state and explores the development of state-society relations since the late nineteenth century. Emelio Betances argues that the groundwork for the establishment of a modern state was laid during the regimes of Ulises Heureaux and RamÃ¯Â¿Â½Ã¯Â¿Â½res. The U.S. military government that followed later expanded and strengthened political and administrative centralization. Between 1886 and 1924, these administrations opened the sugar industry to foreign capital investment, integrated Dominican finance into the international credit system, and expanded the role of the military. State expansion, however, was not accompanied by a strengthening of the social and economic base of national elites. Betances suggests that the imbalance between a strong state and a weak civil society provided the structural framework for the emergence in 1930 of the long-lived Trujillo dictatorship.Examining the links between Trujillo and current caudillo JoaquÃ¯Â¿Â½Balaguer, the author traces continuities and discontinuities in economic and political development through a study of import substitution programs, the reemergence of new economic groups, and the use of the military to counter threats to the status quo. Finally, he explores the impact of foreign intervention and socioeconomic change on the process of state and class formation since 1961.