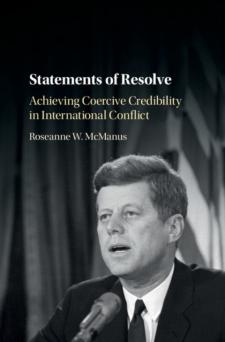 Statements of resolve - in which leaders indicate that their country is committed to a position and will not back down - are a fixture of international conflict. However, scholars have not agreed on how much these statements affect conflict outcomes or which conditions give them coercive credibility. Statements of Resolve argues that an important and underappreciated factor influencing the impact of resolved statements is the ability to follow through. Roseanne W. McManus explains how adversaries analyze a leader's ability to follow through on statements and shows that perceptions of the ability to follow through are influenced not only by military capabilities but also by less obvious domestic political conditions. Through rigorous statistical tests based on quantitative coding of US presidential statements and case studies of three Cold War conflicts, this book shows that resolved statements can effectively coerce adversaries, but only when a sufficient physical and political ability is present.