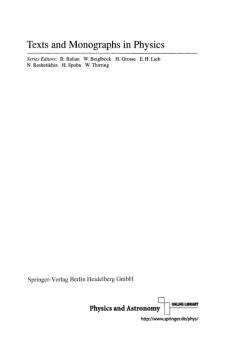 These book grew out of a course entitled &quote;Physikalische Modelle in der Fi- nanzwirtschaft&quote; which I have taught at the University of Freiburg during the winter term 1998/1999, building on a similar course a year before at the University of Bayreuth. It was an experiment. My interest in the statistical mechanics of capital markets goes back to a public lecture on self-organized criticality, given at the University of Bayreuth in early 1994. Bak, Tang, and Wiesenfeld, in the first longer paper on their theory of self-organized criticality [Phys. Rev. A 38, 364 (1988)] mention Mandelbrot's 1963 paper [J. Business 36, 394 (1963)] on power-law scaling in commodity markets, and speculate on economic systems being described by their theory. Starting from about 1995, papers appeared with increasing frequency on the Los Alamos preprint server, and in the physics literature, showing that physicists found the idea of applying methods of statistical physics to problems of economy exciting and that they produced interesting results. I also was tempted to start work in this new field. However, there was one major problem: my traditional field of research is the theory of strongly correlated quasi-one-dimensional electrons, conducting polymers, quantum wires and organic superconductors, and I had no prior education in the advanced methods of either stochastics and quantitative finance.