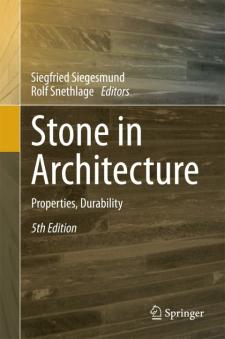 The weathering of historical buildings and, indeed, of monuments and sculptures of natural stone is a problem that has been encountered for hundreds of years. However a dramatic increase in deterioration in the structure of our built heritage has been observed during the past century. To understand the complex interaction that the stone in a building suffers with its near environment (the building) and the macro environment (the local climate and atmospheric conditions) requires an interdisciplinary approach and the application of many disciplines. Climate change over the next 100 years is likely to have a range of direct and indirect impacts on many natural and physical environments, including the built environment. The protection of our architectural heritage has both cultural and historical importance, as well as substantial economic and ecological value. Large sums of money are being spent world-wide on measures for the preservation of monuments and historical buildings. The past few decades has seen an unprecedented level of research activity in this area, the result of which is often difficult to access and are summarized in the new edition of STONE IN ARCHITECTURE. The 4th edition of Stone in Architecture: Properties, Durability, is a sophisticated and thorough exploration of stone – its properties, performance and conservation – in monumental contexts. The current editors, Siegfried Siegesmund and Rolf Snethlage, note the pioneering work of Erhard Winkler who wrote the first edition in 1973 when so little information could be found in the literature on the subject. This new edition, also published by Springer, nearly doubles the size of Winkler’s 1994 effort. If you are familiar with the field and need to know little more than this statement, you can put aside this review and go buy the book. George Wheeler, Department of Scientific Research, The Metropolitan Museum of Art, New York.