Strangers to the Constitution 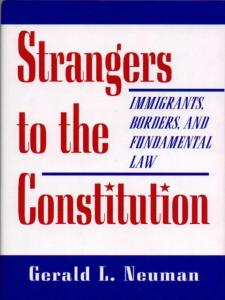 Gerald Neuman discusses in historical and contemporary terms the repeated efforts of U.S. insiders to claim the Constitution as their exclusive property and to deny constitutional rights to aliens and immigrants--and even citizens if they are outside the nation's borders. Tracing such efforts from the debates over the Alien and Sedition Acts in 1798 to present-day controversies about illegal aliens and their children, the author argues that no human being subject to the governance of the United States should be a &quote;stranger to the Constitution.&quote;Thus, whenever the government asserts its power to impose obligations on individuals, it brings them within the constitutional system and should afford them constitutional rights. In Neuman's view, this mutuality of obligation is the most persuasive approach to extending constitutional rights extraterritorially to all U.S. citizens and to those aliens on whom the United States seeks to impose legal responsibilities. Examining both mutuality and more flexible theories, Neuman defends some constitutional constraints on immigration and deportation policies and argues that the political rights of aliens need not exclude suffrage. Finally, in regard to whether children born in the United States to illegally present alien parents should be U.S. citizens, he concludes that the Constitution's traditional shield against the emergence of a hereditary caste of &quote;illegals&quote; should be vigilantly preserved.