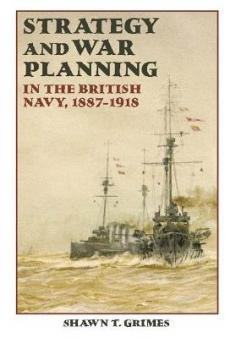 It has been widely accepted that British naval war planning from the late nineteenth century to the First World War was amateur and driven by personal political agenda. But Shawn T. Grimes argues that this was far from the case. His extensive original research shows that, in fact, the Royal Navy had a definitive war strategy, which was well thought-through and formulated in a professional manner.
Faced by a perceived Franco-Russian naval threat, the Admiralty adopted an offensive strategy from 1888 to 1905 based on observational blockade and combined operations. This strategy was modified after 1905 for war with Wilhelmine Germany. The book shows how specific war plans aimed at Germany's naval and economic assets in the Baltic were drawn up between 1906 and 1908 and that the strategy of primary distant blockade, formulated between 1897 and 1907, became a reality in late 1912 and not July 1914 as previously thought. The book argues that the Naval Intelligence Department, which took a lead in devising these plans, was the Navy's de facto staff. Overall, it is clear that there was a continuity underpinning British thinking about how to wage a naval war.