Street with No Name 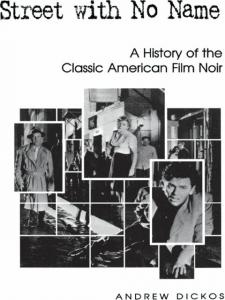 This history of film noir explores the legacy and aesthetic roots of American filmmakers including Orson Welles, John Huston, Otto Preminger, and others. Flourishing in the United States during the 1940s and 50s, the bleak, violent genre of filmmaking known as film noir reflected the attitudes of writers and auteur directors influenced by the events of the turbulent mid-twentieth century. Films such as Force of Evil, Night and the City, Double Indemnity, Kiss Me Deadly and later on, Chinatown and The Grifters are indelibly American. Yet the sources of this genre were found in Germany and France and imported to Hollywood by emigré filmmakers. Andrew Dickos's Street with No Name traces film noir back to its roots in German Expressionist cinema and the French cinema of the interwar years. Dickos describes the development of film noir in America from 1941 through the 1970s, covering notable directors such as Orson Welles, Fritz Lang, John Huston, Nicholas Ray, Robert Aldrich, Samuel Fuller, Otto Preminger, Robert Siodmak, Abraham Polonsky, Jules Dassin, Anthony Mann and others. Dickos also charts the genre's influence on such celebrated postwar French filmmakers as Jean-Pierre Melville, François Truffaut, and Jean-Luc Godard. Addressing the aesthetic, cultural, political, and social concerns of its creators, Street with No Name demonstrates how film noir generates a highly expressive, raw, and violent mood as it exposes the ambiguities of modern postwar society. A Choice Outstanding Academic Title