Strictures on the Modern System of Female Education 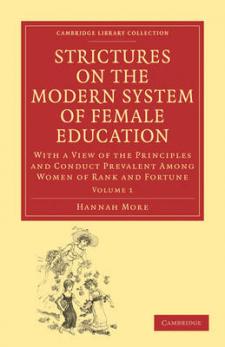 A unique and influential public figure in her time, Hannah More (1745-1833) was a prolific writer. This two-volume study, published in 1799, is her definitive work on women's education, which went through thirteen editions by 1826 and sold over 19,000 copies. The work outlines More's belief that women's education and conduct determined the moral state of a nation, reflecting her acceptance of eighteenth-century views on the status and education of women. In Volume 1, a heavy emphasis is placed on the need for women to observe propriety, and More argues that women should seek to acquire knowledge and discipline rather than accomplishments. The modern reader will find More's conservative stance on women's rights a fascinating contrast to more liberal works of the age, including Mary Wollstonecraft's A Vindication of the Rights of Women. For more information on this author, see http://orlando.cambridge.org/public/svPeople?person_id=moreha