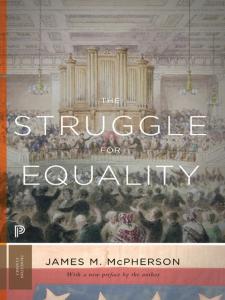 Originally published in 1964, The Struggle for Equality presents an incisive and vivid look at the abolitionist movement and the legal basis it provided to the civil rights movement of the 1960s. Pulitzer Prize-winning historian James McPherson explores the role played by rights activists during and after the Civil War, and their evolution from despised fanatics into influential spokespersons for the radical wing of the Republican Party. Asserting that it was not the abolitionists who failed to instill principles of equality, but rather the American people who refused to follow their leadership, McPherson raises questions about the obstacles that have long hindered American reform movements.This new Princeton Classics edition marks the fiftieth anniversary of the book's initial publication and includes a new preface by the author.