Studies of Christianity - or, Timely Thoughts for Religious Thinkers - The Original Classic Edition 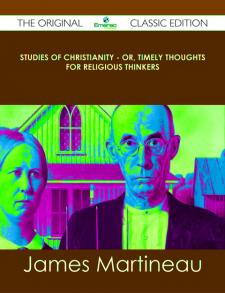 Finally available, a high quality book of the original classic edition of Studies of Christianity - or, Timely Thoughts for Religious Thinkers. It was previously published by other bona fide publishers, and is now, after many years, back in print.

This is a new and freshly published edition of this culturally important work by James Martineau, which is now, at last, again available to you.

Get the PDF and EPUB NOW as well. Included in your purchase you have Studies of Christianity - or, Timely Thoughts for Religious Thinkers in EPUB AND PDF format to read on any tablet, eReader, desktop, laptop or smartphone simultaneous - Get it NOW.

Enjoy this classic work today. These selected paragraphs distill the contents and give you a quick look inside Studies of Christianity - or, Timely Thoughts for Religious Thinkers:

And if it be the function of Christianity not to administer truth entirely new, but to corroborate by fresh evidence, and invest with new beauty, and publish to the millions with a voice of power, a faith latent already in the hearts of many, and scattered through the speculations of the wise and noble few,—to erect into realities the dreams which had visited a half-inspired philosophy, interpreting the life and lot of man;—then there is a relation between the religion of nature and that of Christ,—a relation of original and supplement,—which renders the one essential to the apprehension of the other.

...Still less can we be slaves to Christ, who is no autocrat to us, but our freely followed leader towards God; the guide of our pilgrim troop in quest of a holy land; who gives us no law from the mandates of his will, but only interprets for us, and makes burn within us, in characters of fire, the law of our own hearts; who has no power over us, except through the affections he awakens and the aspirations he sets upon the watch. ... This is a relation which the political terms of the expected theocracy are ill adapted to express; and if we have required many centuries to grope our way to this clearest glory of religion, to disengage it from the impure admixture of servile fear and revolting presumption; if it has taken long for us to melt away in our imagination the images of thrones and tribunals, of prize-givings and prisons, of a police and assizes of the universe; if only at the eleventh hour of our faith, the cloud has passed away, and shown us the true angel-ladder that springs from earth to heaven, the pure climax of souls whereon each below looks up and rises, yet each above bends down and helps;—the discovery which brings such peace and freedom to the heart, has been delayed by the mistaken identification of the entire creed of the first age with the essence of Christianity.

About James Martineau, the Author:

He described in graphic terms the greatest of the more superficial changes he underwent; how he had 'carried into logical and ethical problems the maxims and postulates of physical knowledge,' and had moved within the narrow lines drawn by the philosophical instructions of the class-room 'interpreting human phenomena by the analogy of external nature'; how he served in willing captivity 'the 'empirical' and 'necessarian' mode of thought,' even though 'shocked' by the dogmatism and acrid humours 'of certain distinguished representatives' and how in a period of 'second education' at Humboldt University in Berlin, 'mainly under the admirable guidance of Professor Trendelenburg,' he experienced' a new intellectual birth' which ' was essentially the gift of fresh conceptions, the unsealing of hidden openings of self-consciousness, with unmeasured corridors and sacred halls behind; and, once gained, was more or less available throughout the history of philosophy, and lifted the darkness from the pages of Kant and even Hegel.'

...Despite his belief that the Bible was fallible, Martineau continued to hold the view, which was not so much characteristic of the