Studies in the History of Tax Law, Volume 6 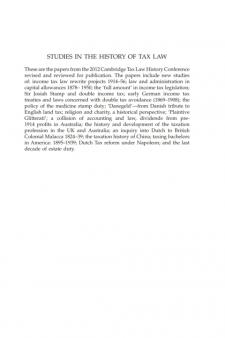 These are the papers from the 2012 Cambridge Tax Law History Conference revised and reviewed for publication. The papers include new studies of: income tax law rewrite projects 1914 1956; law and administration in capital allowances 1878 1950; the 'full amount' in income tax legislation; Sir Josiah Stamp and double income tax; early German income tax treaties and laws concerned with double tax avoidance (1869 1908); the policy of the medicine stamp duty; 'Danegeld' from Danish tribute to English land tax; religion and charity, a historical perspective; 'Plaintive Glitterati'; a collision of accounting and law, dividends from pre-1914 profits in Australia; the history and development of the taxation profession in the UK and Australia; an inquiry into Dutch to British Colonial Malacca 1824 1839; the taxation history of China; taxing bachelors in America: 1895 1939; Dutch Tax reform under Napoleon; and the last decade of estate duty.The Publisher and authors have dedicated this volume to the memory of John Tiley, Emeritus Professor of the Law of Taxation at the University of Cambridge, who died as it was going to press. The Cambridge History of Tax conferences were his idea and he was responsible for their planning. He also edited all six volumes in the series.