Studies in the Scottish Lateglacial Environment 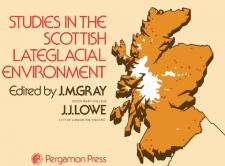 Studies in the Scottish Lateglacial Environment presents information on environmental reconstructions and dramatic changes, as well as the important implications of studies of the Lateglacial environment for Quaternary studies and modern climatic variations.
Composed of 10 chapters, this book begins with a review of the Late Devensian glaciation in north-east Scotland. Then, detailed evidence concerning Lateglacial sea-level changes in the Earn-Tay area and their relationship to deglaciation is presented. Subsequent chapters explore the validity of the Oban-Ford Moraine, the only pre-Loch Lomond Readvance moraine remaining virtually unchallenged in the literature; reconstruction of Lateglacial and early Flandrian environments in south-west Scotland; and the fauna in marine sediments at Lochgilphead. Other chapters describe results of pollen-stratigraphic investigations at six Lateglacial sites in the southern and eastern Grampian Highlands; analyses of biological and chemical variables from sediment profiles from lochs in northern Scotland; and radiocarbon dates that are related to pollen profiles from the Scottish Highlands and the Isle of Skye.
This book will be of value to students of Quaternary, as this text provides an integrated survey of available information in this field.