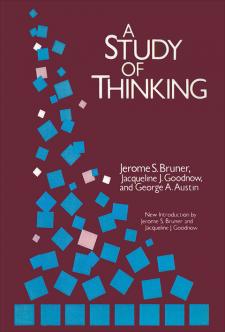 A Study of Thinking is a pioneering account of how human beings achieve a measure of rationality in spite of the constraints imposed by bias, limited attention and memory, and the risks of error imposed by pressures of time and ignorance. First published in 1956 and hailed at its appearance as a groundbreaking study, it is still read three decades later as a major contribution to our understanding of the mind. In their insightful new introduction, the authors relate the book to the cognitive revolution and its handmaiden, artificial intelligence.The central theme of the work is that the scientific study of human thinking must concentrate upon meaning and its achievement rather than upon the behaviorists' stimuli and responses and the presumed connections between them. The book's point of departure is how human beings group the world of particulars into ordered classes and categories-concepts-in order to impose a coherent and manageable order upon that world. But rather than relying principally on philosophical speculation to make its point, A Study of Thinking reports dozens of experiments to elucidate the strategies that people use in penetrating to the deep structure of the information they encounter.This seminal study was a major event in the cognitive revolution of the 1950s. Reviewing it at the time, J. Robert Oppenheimer said it &quote;has in many ways the flavor of conviction which makes it point to the future.&quote;