Tama of the Light Country 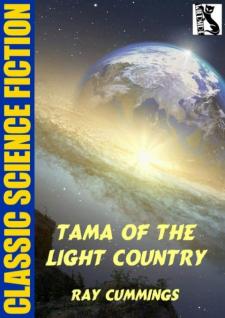 One midnight in August, the raids began. The White Summer Camp for Girls was struck first and when the confusion ended ten girls were missing and two were dead.

Hysterical witnesses claimed they saw shapeless forms lurking at the cabin windows. Several girls mentioned flashes of green-blue light. As stories trickled in from the surrounding countryside, it became evident that these inhuman invaders were attacking with a purpose—and from outer space. Why were the victims always young girls? How, despite the constant surveillance of the State Patrol, did the invaders strike?

A team of scientists and reporters left earth in a pioneer space ship to try and solve the mystery. Among them was the sister of the famous Guy Palisse who had disappeared into space ten years ago in an attempt to reach the moon. Reports indicated that he was dead, but near White Summer Camp the body of a winged girl was found. The last words she had gasped were in English. Was it possible Guy had reached his destination after all?