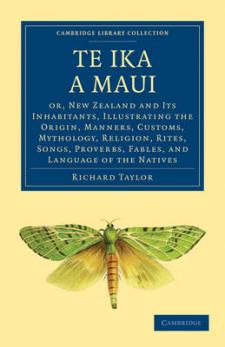 Reverend Richard Taylor (1805-1873) was an English missionary, who wrote extensively on Maori culture and the plant and animal life of New Zealand. Taylor graduated from Queens' College, Cambridge in 1828 and was ordained as an Anglican priest the same year. After serving as a curate in the Isle of Ely, Taylor was appointed as a missionary to New Zealand for the Church Missionary Society. He arrived in Australia in 1836 and landed in New Zealand in 1839. Taylor quickly became a peacekeeper between the different Maori tribes in his district. This volume, first published in 1855, provides a detailed account of Maori mythology and culture with a description of the plant life, animal life and geology of the North Island. Taylor strongly condemns contemporary (nineteenth-century) attitudes to Maori culture and demonstrates the complexity of their society in this sympathetic book.