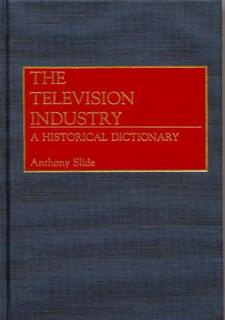 As the title implies, the business of television rather than its programming is the focus of this historical dictionary. Its entries briefly relate the histories of production companies, networks, cable stations, industry associations, and public interest pressure groups. The focus is on the American television industry from its origins through early 1991, but it also selctively covers the industry worldwide. . . . Because entries relate only essential facts, many are amplified by brief bibliographies of books and articles, many of the latter from trade magazines. An appendix profiling Goldenson, Paley, and Sarnoff, the guiding spirits of ABC, CBS, and NBC, respectively, precedes a brief bibliography and the names index. Slide has produced another hit, another basic source on one of America's basic industries. Wilson Library Bulletin

This unique dictionary is the first what's what of television. Its more than 1,000 entries provide succinct factual data on production companies, distributors, organizations, genres, historical and technical terms, and much more. All areas of the industry, including free, public, and cable television, are covered. While the majority of the entries relate to the American television industry, the book is international in scope. Following many of the entries is an address, if the company or organization is still active, and, where appropriate, a bibliography. An asterisk following a name indicates that there is a separate entry for that subject. Headings are based on the best-known name of the company or technical innovation and are not necessarily the final names by which the subjects are known. However, all such alternative names are included in the index. Wherever feasible, birth and death years are noted for key figures. A general bibliography of reference books on television appears at the end of the volume. The index provides immediate access to all the entries and to the personalities discussed in each entry. In addition, there is a program index, providing the reader with speedy information as to which company or distributor is responsible for which series.

The Television Industry will serve as an essential reference tool for any scholar, student, or librarian involved in the study of the television industry. It will also prove enlightening and interesting for the casual reader.