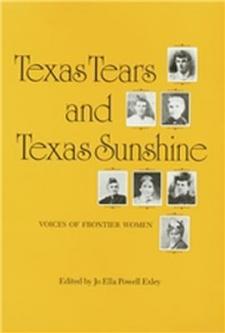 Texas Tears and Texas Sunshine are the names of popular quilt patterns, and in this volume, now in its seventh printing, sixteen pioneer women describe how they pieced together a life for their families on the harsh frontier. Their first-person narratives, selected and edited by Jo Ella Powell Exley, provide a gripping, highly personal history of the state from Stephen F. Austin's original settlement through the taming of its last frontier in the west. The stories in Texas Tears and Texas Sunshine cover nearly a century, from the log cabin days of Anglo colonization and the Old Three Hundred to the settlement of the South Plains in the early twentieth century. Through the years, Indian raids, frontier-style "society balls," the Runaway Scrape, plantation life, yellow fever, trail drives, and the bloody Council House fight in San Antonio provided some of the blocks for this quilt. The rugged sunshine of daily life and the tears of frontier hardship combine in fascinating, realistic patterns.

" . . . a fascinating collection of some of the Texas women's experiences. . . . Texas Tears and Texas Sunshine, a realistic look at the women of the frontier, is a book that also instills lessons of pride and courage for today."--Southern Living