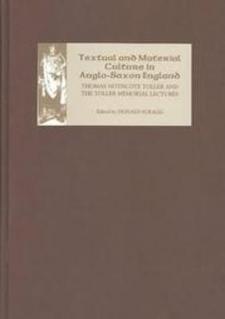 Thomas Northcote Toller, of the Bosworth-Toller Anglo-Saxon Dictionary, is one of the most influential but least known Anglo-Saxon scholars of the early twentieth century. The Centre for Anglo-Saxon Studies at Manchester, where Toller was the first professor of English Language, has an annual Toller lecture, delivered by an expert in the field of Anglo-Saxon Studies; this volume offers a selection from these lectures, brought together for the firsttime, and with supplementary material added by the authors to bring them up to date. They are complemented by the 2002 Toller Lecture, Peter Baker's study of Toller, commissioned specially for this book; and by new examinations ofToller's life and work, and his influence on the development of Old English lexicography. The volume is therefore both an epitome of the best scholarship in Anglo-Saxon studies of the last decade and a half, and a guide for the modern reader through the major advances in our knowledge of the life and culture of pre-Conquest England.
,
Contributors: RICHARD BAILEY, PETER BAKER, DABNEY ANDERSON BANKERT, JANET BATELY, GEORGE BROWN, ROBERTA FRANK, HELMUT GNEUSS, JOYCE HILL, DAVID A. HINTON, MICHAEL LAPIDGE, AUDREY MEANEY, KATHERINE O'BRIEN O'KEEFFE, JOANA PROUD, ALEXANDER RUMBLE.