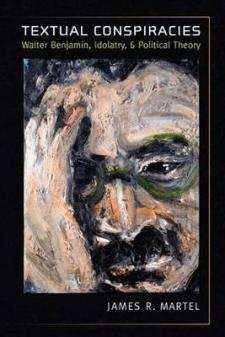 "This is a sophisticated and fascinating argument written in a very enjoyably entertaining style. It is hard for me to see how readers initially interested in these texts will not be `swept off their feet' by the core assertions of this author, and the devastatingly comprehensive way in which he demonstrates those arguments." -Brent Steele, University of Kansas In Textual Conspiracies, James R. Martel applies the literary, theological, and philosophical insights of Walter Benjamin to the question of politics and the predicament of the contemporary left. Through the lens of Benjamin's theories, as influenced by Kafka, of the fetishization of political symbols and signs, Martel looks at the ways in which various political and literary texts "speak" to each other across the gulf of time and space, thereby creating a "textual conspiracy" that destabilizes grand narratives of power and authority and makes the narratives of alternative political communities more apparent. However, in keeping with Benjamin's insistence that even he is complicit with the fetishism that he battles, Martel decentralizes Benjamin's position as the key theorist for this conspiracy and contextualizes Benjamin in what he calls a "constellation" of pairs of thinkers and writers throughout history, including Alexis de Tocqueville and Edgar Allen Poe, Hannah Arendt and Federico Garcia Lorca, and Frantz Fanon and Assia Djebar.