Theory of the Trial 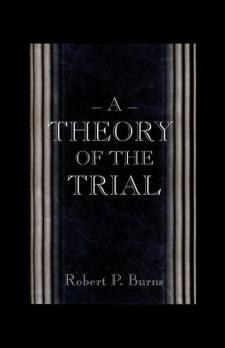 Anyone who has sat on a jury or followed a high-profile trial on television usually comes to the realization that a trial, particularly a criminal trial, is really a performance. Verdicts seem determined as much by which lawyer can best connect with the hearts and minds of the jurors as by what the evidence might suggest. In this celebration of the American trial as a great cultural achievement, Robert Burns, a trial lawyer and a trained philosopher, explores how these legal proceedings bring about justice. The trial, he reminds us, is not confined to the impartial application of legal rules to factual findings. Burns depicts the trial as an institution employing its own language and styles of performance that elevate the understanding of decision-makers, bringing them in contact with moral sources beyond the limits of law. Burns explores the rich narrative structure of the trial, beginning with the lawyers' opening statements, which establish opposing moral frameworks in which to interpret the evidence. In the succession of witnesses, stories compete and are held in tension. At some point during the performance, a sense of the right thing to do arises among the jurors. How this happens is at the core of Burns's investigation, which draws on careful descriptions of what trial lawyers do, the rules governing their actions, interpretations of actual trial material, social science findings, and a broad philosophical and political appreciation of the trial as a unique vehicle of American self-government.