The Third Force in the Vietnam War 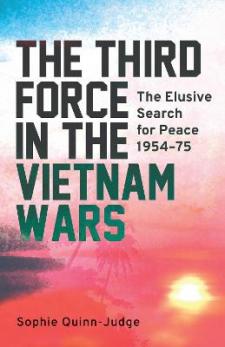 It was the conflict that shocked America and the world, but the struggle for peace is central to the history of the Vietnam War. Rejecting the idea that war between Hanoi and the US was inevitable, the author traces North Vietnam's programs for a peaceful reunification of their nation from the 1954 Geneva negotiations up to the final collapse of the Saigon government in 1975. She also examines the ways that groups and personalities in South Vietnam responded by crafting their own peace proposals, in the hope that the Vietnamese people could solve their disagreements by engaging in talks without outside interference. While most of the writing on peacemaking during the Vietnam War concerns high-level international diplomacy, Sophie Quinn-Judge reminds us of the courageous efforts of southern Vietnamese, including Buddhists, Catholics, students and citizens, to escape the unprecedented destruction that the US war brought to their people. The author contends that US policymakers showed little regard for the attitudes of the South Vietnamese population when they took over the war effort in 1964 and sent in their own troops to fight it in 1965.A unique contribution of this study is the interweaving of developments in South Vietnamese politics with changes in the balance of power in Hanoi; both of the Vietnamese combatants are shown to evolve towards greater rigidity as the war progresses, while the US grows increasingly committed to President Thieu in Saigon, after the election of Richard Nixon.
Not even the signing of the 1973 Paris Peace Agreement could blunt US support for Thieu and his obstruction of the peace process. The result was a difficult peace in 1975, achieved by military might rather than reconciliation, and a new realization of the limits of American foreign policy.