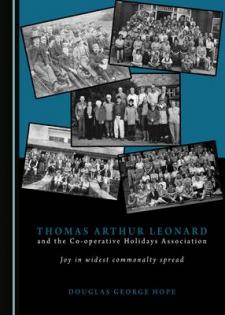 This book focuses on Thomas Arthur Leonard, a Congregational minister in Colne, Lancashire in the 1890s, and the Co-operative Holidays Association, which he founded in 1893. The Co-operative Holidays Association, which was re-named the Countrywide Holidays Association in 1964, but was always affectionately known as the CHA, operated as an independent provider of outdoor holidays until 2002.Leonard left the CHA in 1913 to establish the Holiday Fellowship, an organisation with similar ideals to the CHA, which continues to trade as HF Holidays. Leonard was also instrumental in the establishment of the Youth Hostels Association in 1930 and the formation of the Ramblers' Association in 1935, of which he was the first President. He strongly supported the National Trust, founded in 1895, and was a stalwart of the campaign for national parks during the 1930s. He was a founder member of the Friends of the Lake District in 1934, and was connected with a number of other outdoor holiday organisations. This book details the life and achievements of this extraordinary man, who rebelled against the conventionality of the 1880s and 1890s and was appalled by the dull and grim lives of artisans and textile workers in the industrial north of England. It also tells the story of the CHA, which pioneered walking holidays in the outdoors for working people, from its foundation in 1893 to its demise in 2004. The book describes how the CHA faced the challenges of changing social, economic and cultural conditions during the twentieth century, such as increasing affluence and consumer choice, changing cultural attitudes and expectations, the popularisation of outdoor recreation and the proliferation of outdoor holiday providers. It shows how the CHA drifted away from its original ideals in an attempt to remain viable in the face of increasing consumerism, but, nevertheless, continued to provide holidays for thousands of people based on healthy recreation and quiet enjoyment, and the principles of friendship and fellowship.