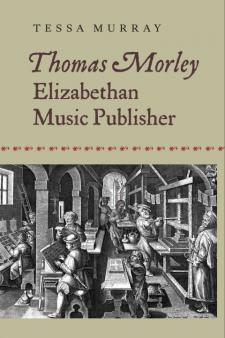 The Renaissance composer and organist Thomas Morley (c.1557-1602) is best known as a leading member of the English Madrigal School, but he also built a significant business as a music publisher. This book looks at Morley's pioneering contribution to music publishing in England, inspired by an established music printing culture in continental Europe. A student of William Byrd, Morley had a conventional education and early career as a cathedral musician both in Norwich and at St Paul's cathedral. Morley lived amongst the traders, artisans and gentry of England's major cities at a time when a market for recreational music was beginning to emerge. His entrepreneurial drive combinedwith an astute assessment of his market resulted in a successful and influential publishing business. The turning point came with a visit to the Low Countries in 1591, which gave him the opportunity to see a thriving music printpublication business at first hand.
Contemporary records provide a detailed picture of the processes involved in early modern music publishing and enable the construction of a financial model of Morley's business. Morley died too young to reap the full rewards of his enterprise, but his success inspired the publication by his contemporaries of a significant corpus of readily available recreational music for the public. Critical to Morley's successwas his identification of the sort of music, notably the Italianate lighter style of madrigal, that would appeal to amateur musicians. Surviving copies of the original prints show that this music continued to be used for severalgenerations: new editions in modern notation started to appear from the mid eighteenth century onwards, suggesting that Morley truly had the measure of the market for recreational music. Thomas Morley: Elizabethan Music Publisher will be of particular interest to scholars and students of renaissance music, as well as the history of music publishing and print.

Tessa Murray is an honorary research fellow at the University of Birmingham.