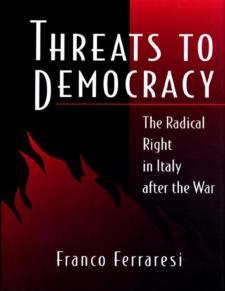 This book represents the first systematic research by a social scientist on the radical right-wing movements in Italy since 1945. During the heyday of right-wing violence between 1969 and 1980, street aggressions, attacks, and murders were commonplace. These bloody episodes were assumed to be the work of fanatical bands of &quote;political soldiers&quote; and urban warriors loosely controlled by secret services and other covert groups, which used them as part of a &quote;strategy of tension&quote; pursued in domestic and international circles. Franco Ferraresi here acknowledges that these rightist groups were in fact permitted a certain amount of freedom, and even in some cases actually aided, in the hope that revulsion at terrorist tactics would have the effect of mobilizing public opinion in favor of existing political arrangements. However, he also studies the extent to which they operated as autonomous units, while he carefully considers the political heritage, the doctrines, and the ideology that motivated them.With the decline of violent activity on both extremes of the political spectrum in the early 1980s, the theory and practice so comprehensively discussed by Ferraresi seemed to have entered a dormant stage. Ferraresi, however, places in context the recent resurgence of neo-fascist forces in Italy, and of the so-called New Right throughout Europe, together with the rise of fundamentalism in many parts of the world.