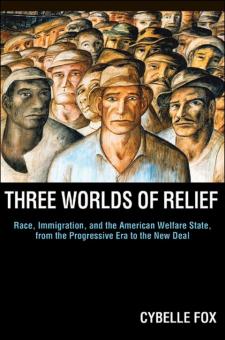 Three Worlds of Relief examines the role of race and immigration in the development of the American social welfare system by comparing how blacks, Mexicans, and European immigrants were treated by welfare policies during the Progressive Era and the New Deal. Taking readers from the turn of the twentieth century to the dark days of the Depression, Cybelle Fox finds that, despite rampant nativism, European immigrants received generous access to social welfare programs. The communities in which they lived invested heavily in relief. Social workers protected them from snooping immigration agents, and ensured that noncitizenship and illegal status did not prevent them from receiving the assistance they needed. But that same helping hand was not extended to Mexicans and blacks. Fox reveals, for example, how blacks were relegated to racist and degrading public assistance programs, while Mexicans who asked for assistance were deported with the help of the very social workers they turned to for aid. Drawing on a wealth of archival evidence, Fox paints a riveting portrait of how race, labor, and politics combined to create three starkly different worlds of relief. She debunks the myth that white America's immigrant ancestors pulled themselves up by their bootstraps, unlike immigrants and minorities today. Three Worlds of Relief challenges us to reconsider not only the historical record but also the implications of our past on contemporary debates about race, immigration, and the American welfare state.