'Til Death Or Distance Do Us Part 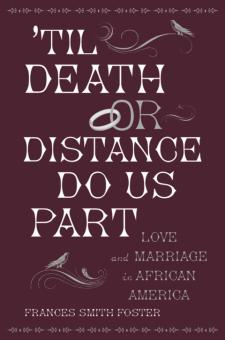 Conventional wisdom tells us that marriage was illegal for African Americans during the antebellum era, and that if people married at all, their vows were tenuous ones: "until death or distance do us part." It is an impression that imbues beliefs about black families to this day. But it's a perception primarily based on documents produced by abolitionists, the state, or other partisans. It doesn't tell the whole story.Drawing on a trove of less well-known sources including family histories, folk stories, memoirs, sermons, and especially the fascinating writings from the Afro-Protestant Press,'Til Death or Distance Do Us Part offers a radically different perspective on antebellum love and family life.Frances Smith Foster applies the knowledge she's developed over a lifetime of reading and thinking. Advocating both the potency of skepticism and the importance of story-telling, her book shows the way toward a more genuine, more affirmative understanding of African American romance, both then and now.