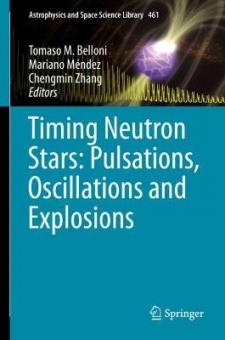 Neutron stars, whether isolated or in a binary system, display a varied and complex phenomenology, often accompanied by extreme variability of many time scales, which takes the form of pulsations due to the object rotation, quasi-periodicities associated to accretion of matter, and explosions due to matter accreted on the surface or to starquakes of highly magnetized objects.

This book gives an overview of the current observational and theoretical standpoint in the research on the physics under the extreme conditions that neutron stars naturally provide. The six chapters explore three physical regions of a neutron star:

the space around it, where accretion and pulsar companions allow testing of general relativity
its surface, where millisecond pulsation and X-ray burts provide clues about general relativistic effects and the equation of state of neutron matter
its interior, of course, inaccessible to direct observations, can nevertheless, be probed with all observational parameters related to neutron star variability.