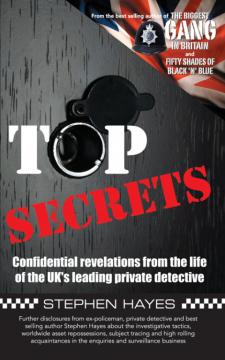 The anticipated final book in the Biggest Gang in Britain trilogy. Moving on from the brutally honest accounts of police work during the 1960s and 1970s to the private detective sector of the 1980s and 1990s. The latest book gives further eye opening, and gripping revelations of accepted practices then and until the Human Rights Act of 1998 when such devious practices went underground and of course were constantly denied, but actively used until and beyond the prosecutions, imprisonment and further revelations concerning the News of the World journalists and others. As with Hillsborough, Jimmy Savile, Plebgate etc. in relation to the culture of lies and fabrication within the police the hacking, bribing and blagging practices of the media using private detectives were shockingly revealed for all to see. Following hot on the tracks of such revelations comes Top Secrets and once again, written in the same style as the first two books but this time naming names. Of course the book comes with hard hitting humour, is refreshing and surprising and if nothing else gives an entertaining insight into what were once accepted practices of private detectives and now all said to be underground and of course hidden in a blanket of denial. A colourful life, many amusing high spots but tinged with heart breaking sadness, charity work, Christianity and support of Firehiwot Abebe an Ethiopian five year old through Compassion, a charity releasing children from poverty. Every purchase gives valuable support to this child whose favourite game is sadly, 'jumping' and her favourite food is 'rice' and other little children with similar simple pleasures.