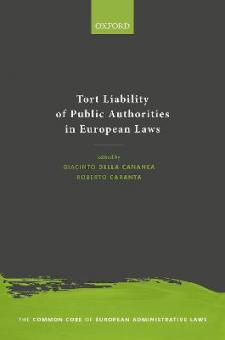 This series argues that there is a common administrative core to European legal systems that can be better understood in comparative terms. This volume examines government liability in tort, using case studies to explore different government responses.

Part I sets the stage for the project and the parameters followed by the scholars involved. Part II expands on the legal systems chosen for comparison, setting up their general tort procedures. Part III presents case studies from Austria, the European Union, France, Germany, Hungary, Italy, Poland, Romania, Spain, Switzerland, and the United Kingdom. Each case study has a theoretical response detailing what would happen should that case occur within each country's borders. Part IV compares and
contrasts the information provided in Part III. It examines both the commonalities and the distinctive traits of these legal systems, with a view to understand the nature of their 'common core'.

This volume is an essential tool for anyone involved in administrative and constitutional law and government liability in tort.