Torture and the Twilight of Empire 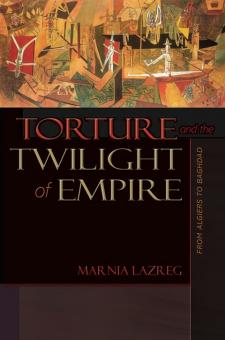 Torture and the Twilight of Empire looks at the intimate relationship between torture and colonial domination through a close examination of the French army's coercive tactics during the Algerian war from 1954 to 1962. By tracing the psychological, cultural, and political meanings of torture at the end of the French empire, Marnia Lazreg also sheds new light on the United States and its recourse to torture in Iraq and Afghanistan. This book is nothing less than an anatomy of torture--its methods, justifications, functions, and consequences. Drawing extensively from archives, confessions by former torturers, interviews with former soldiers, and war diaries, as well as writings by Jean-Paul Sartre, Albert Camus, and others, Lazreg argues that occupying nations justify their systematic use of torture as a regrettable but necessary means of saving Western civilization from those who challenge their rule. She shows how torture was central to guerre revolutionnaire, a French theory of modern warfare that called for total war against the subject population and which informed a pacification strategy founded on brutal psychological techniques borrowed from totalitarian movements. Lazreg seeks to understand torture's impact on the Algerian population--especially women--and also on the French troops who became their torturers. She explores the roles Christianity and Islam played in rationalizing these acts, and the ways in which torture became not only routine but even acceptable. Written by a preeminent historical sociologist, Torture and the Twilight of Empire holds particularly disturbing lessons for us today as we carry out the War on Terror.