Toward an End to Hunger in America 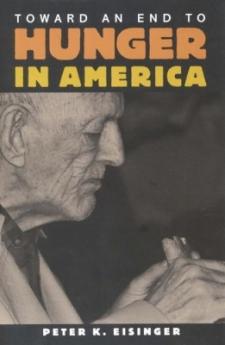 Cheap, plentiful food is an American tradition. We spend a smaller percentage of our income on food than any other nation. We feed much of the world with our surpluses. Consumers, retailers, and restaurants throw away one-quarter of our food stock every year. And yet data collected by the federal government show that almost 12 percent of American households either suffer from hunger or worry about going hungry.
Why are so many Americans afflicted with "food insecurity" during such prosperous times? According to this book, it's not simply an artifact of poverty: even most of the poorest homes have access to adequate food. Nor is it indifference to their plight or a lack of ways to help: Americans strongly support government food assistance, and there are a host of public and private programs devoted to feeding the hungry.
Peter Eisinger seeks to unravel the puzzle of America's hunger and asserts that it is a problem that can be solved. He believes that the perception of hunger and responses to it emerge from a complex, intellectual, political, and social context. He begins by looking for a meaningful definition of hunger, then examines the structure and funding of government food assistance programs, the roles of Congress and community interest groups, and the contributions of volunteer organizations. He concludes by offering ideas to reduce the nation's perplexing hunger problem, based on creating stronger partnerships between public and private food programs.