Towards an Imperfect Union 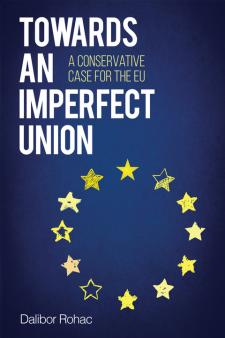 In today’s Europe, deep cracks are showing in the system of political cooperation that was designed to prevent the geopolitical catastrophes that ravaged the continent in the first half of the twentieth century. Instead of sounding the alarm, many conservatives have become cheerleaders for the demise of the European Union (EU). This compelling book represents the first systematic attempt to justify the European project from a free-market, conservative viewpoint. Although many of their criticisms are justified, Dalibor Rohac contends that Euroskeptics are playing a dangerous game. Their rejection of European integration places them in the unsavory company of nationalists, left-wing radicals, and Putin apologists. He convincingly shows that the flourishing of democracy and free markets in Europe historically has gone hand in hand with the integration project. Europe’s pre-EU past, in contrast, was marked by a series of geopolitical calamities. Instead of advocating for the end of the EU, Rohac argues that conservatives must come to the rescue of the integration project by helping to reduce the EU’s democratic deficit and turning it into an engine of economic dynamism and prosperity.