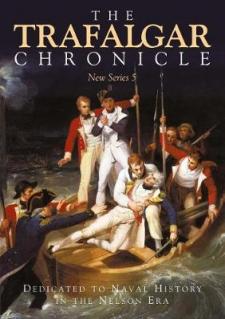 _The Trafalgar Chronicle_ is a prime source of information as well as the publication of choice for new research about the Georgian Navy, sometimes also loosely referred to as 'Nelson's Navy', though its scope reaches out to include all the sailing navies of the period. The central theme of the 2020 issue is 'portrayals of the Georgian Navy though art, literature, and film'. The feature article, by Gerald Stulc, MD, analyses film depictions and portraits of Horatio Nelson, throughout his service and after his death, comparing these images to the clinical realities of Nelson's injuries in battle.

Additional theme-related contributions include the story behind the most famous paintings of Nelson's death; how Tobias Smollet wrote a novel revealing the unhygienic and inhumane medical care aboard Royal Navy ships of the day; the rise of the fouled anchor motif; modern-day naval historical fiction portrayals of women in the era of Nelson; and whimsical drawings of Nelson in caricature and cartoon.

In the tradition of recent editions of _The Trafalgar Chronicle_, this issue contains biographical sketches of Royal Navy contemporaries of Nelson including Sir Andrew Pellet Green, Commander James Pearl, Captain John Houghton Marshall, and Captain Ralph Willet Miller, and Sir Home Popham. Each made a unique contribution to Britain's victories at sea. Of more general interest to readers, the 2020 issue provides articles about the role of Spain in the American Revolution, new revelations about Cornwallis' children that he fathered while stationed in the Caribbean, and how the American War for Independence influenced Royal Navy operations in the War of 1812.