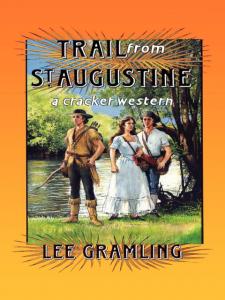 Cracker Westerns are rip-roarin, action-packed, can't-put-'em-down tales set in the frontier days of Florida. They are full of adventure, real heroes, and vivid, authentic details that bring Florida's history to life. In the spring of 1771, John MacKenzie arrives in British-ruled St. Augustine after a year of fur trapping. He is quickly drawn into an adventure that involves defending a young woman indentured to the powerful and treacherous James Tyrone. MacKenzie and Becky Campbell set out across the untamed Florida wilderness, accompanied by a crusty sailor named Blackpool Bobby and Jeremiah, a black slave-hunter. They are pursued by Tyrone's murderous trackers toward buried gold and a showdown on the windswept sands of the Florida Gulf coast. Next in series > > See all of the books in this series