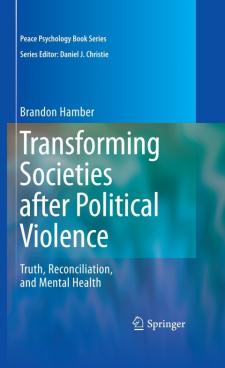 Paraphrasing Descartes, we may say that one method is to take the reader into your conf idence by explaining to him how you arrived at your discovery; the other is to bully him into accepting a conclusion by parading a series of propositions which he must accept and which lead to it. The first method allows the reader to re-think your own thoughts in their natural order. It is an autobiographical style. Writing in this style, you include, not what you had for breakfast on the day of your discovery, but any significant consideration which helped you arrive at your idea. In particular, you say what your aim was – what problems you were trying to solve and what you hoped from a solution of them. The other style suppresses all this. It is didactic and intimidating. J. W. N. Watkins, Confession is Good for Ideas (Watkins, 1963, pp. 667–668) I began writing this book over 12 years ago. It was started in the midst of the South African Truth and Reconciliation Commission (TRC). It is an exploration of what I have learned from the process. During the TRC, I was working at the Centre for the Study of Violence and Reconciliation (CSVR) in South Africa, primarily with people who testified before the Commission, but also on a range of research and policy initiatives in the area that is now called ‘transitional justice’. I have written about the TRC process extensively.