Transnationalism and the Politics of Sending States 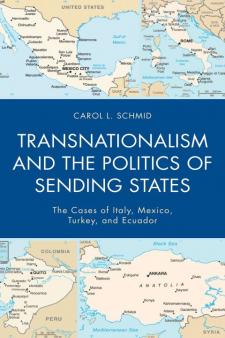 Theories on transnationalism are primarily interested in the practices of immigrant populations. Few studies analyze sending states, the perceived state of origin of immigrants, and their attempts to extend beyond state borders to both enrich the emigrant state and bind together the emigrants in comparative perspective. Carol Schmid explores the transnational sending state policies of Italy in the U.S., Mexico in the U.S., Turkey in Germany, and Ecuador in Spain and argues that these sending states are extending their right to govern beyond the territorial confines using similar policies and practices. While all four cases above confer citizenship rights and obligations on their emigrants, depending on the historical conditions and immigrant waves, there is a fundamental conflict between sending and receiving states. This book examines state transnationalism in comparative perspective, specifically the shifting policies and restrictions of sending states in the United States and Europe toward immigrant communities living abroad. This bookfurther analyzes the transnational polarizing policies of Turkey in Germany and Ecuadorian migrants in Spain, where women have led the immigration wave.