Transnationalism, Diaspora and Migrants from the former Yugoslavia in Britain 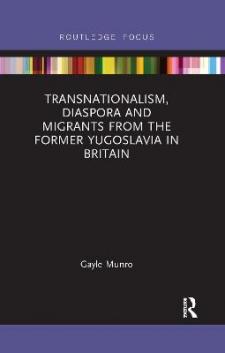 The geo-political area of what once constituted Yugoslavia has been a region of significant migration since the 1960s. More recently, the conflicts in the region were the catalysts for massive displacements of individuals, families and whole communities. Thus far, there has been a gap in the literature on the qualitative experience of migrants from the former Yugoslavia through the twin theoretical lenses of transnationalism and diaspora.

This book offers an ethnographic account of migration and life in diaspora of migrants originating from the former Yugoslavia and now living in Britain. Concepts such as the development of cultural beacons and diasporic borrowing are introduced through the ways in which migrants from the region form community associations and articulate - or avoid - such affiliations. The study examines the ways in which the experience of migration can be shaped by the socio-political contexts of departure and arrival, and considers how the lexicon associated with the act of migration can weave itself into the identities of migrants. The ways in which the transnational and diasporic spaces are dictated by certain narratives, for example the allegory of dreaming and the language of guilt, are explored. It also investigates migrants' ongoing connection with the homeland, considering social and cultural elements, their reception in UK, and British media representations of Yugoslavia.

Contributing to the knowledge on the experiences of migrants from a part of the world which has been under-researched in terms of its migrating populations, this book will be of interest to students and scholars of Political Geography, Social Geography, Eastern European Politics, and Migration and Diaspora studies.