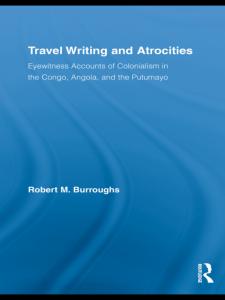 This book examines eyewitness travel reports of atrocities committed in European-funded slave regimes in the Congo Free State, Portuguese West Africa, and the Putumayo district of the Amazon rainforest during the late-nineteenth and early-twentieth centuries. During this time, British explorers, missionaries, consuls, journalists, soldiers, and traders produced evidence of misrule in the Congo, Angola, and the Putumayo, which they described their travel and witnessing of colonial violence in travelogues, ethnographic monographs, consular reports, diaries and letters, sketches, photography, and more. As well as bringing home to readers ongoing brutalities, eyewitness narratives contributed to debates on humanitarianism, trade, colonialism, and race and racial prejudice in late Victorian and Edwardian Britain. In particular, whereas earlier antislavery travelers had tended to promote British imperial expansion as a remedy to slavery, travel texts produced for the three major humanitarian campaigns of the late-nineteenth and early-twentieth century expressed — and, indeed, gave rise to — changes in the perception of Britain as a nation for whom the protection of Africans remained paramount. Burroughs's study charts the emergence of a subversive eyewitness response in travel writing, which implicated Britons and British industries in the continuing existence of slave labor in regions formally ruled by other nations.