Traveling at the Speed of Thought 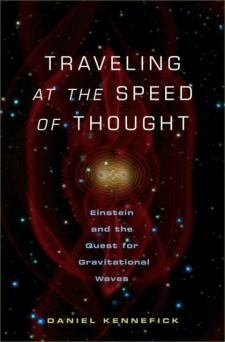 Since Einstein first described them nearly a century ago, gravitational waves have been the subject of more sustained controversy than perhaps any other phenomenon in physics. These as yet undetected fluctuations in the shape of space-time were first predicted by Einstein's general theory of relativity, but only now, at the dawn of the twenty-first century, are we on the brink of finally observing them. Daniel Kennefick's landmark book takes readers through the theoretical controversies and thorny debates that raged around the subject of gravitational waves after the publication of Einstein's theory. The previously untold story of how we arrived at a settled theory of gravitational waves includes a stellar cast from the front ranks of twentieth-century physics, including Richard Feynman, Hermann Bondi, John Wheeler, Kip Thorne, and Einstein himself, who on two occasions avowed that gravitational waves do not exist, changing his mind both times. The book derives its title from a famously skeptical comment made by Arthur Stanley Eddington in 1922--namely, that "gravitational waves propagate at the speed of thought." Kennefick uses the title metaphorically to contrast the individual brilliance of each of the physicists grappling with gravitational-wave theory against the frustratingly slow progression of the field as a whole. Accessibly written and impeccably researched, this book sheds new light on the trials and conflicts that have led to the extraordinary position in which we find ourselves today--poised to bring the story of gravitational waves full circle by directly confirming their existence for the very first time.