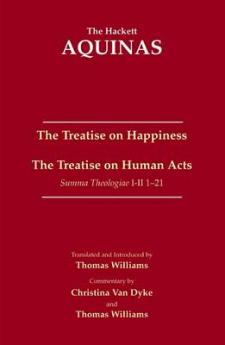 The Treatise on Happiness

The fifth volume of The Hackett Aquinas, a series of central philosophical treatises of Aquinas in new, state-of-the-art translations accompanied by a thorough commentary on the text. Acclaim for previous volumes in the series: The Treatise on Human Nature Translated, with Commentary, by Robert Pasnau "This very readable and accurate translation of the so-called Treatise on Human Nature strikes the right balance between literal rendition of Aquinas' Latin and naturalness of English expression, and thus will be of use both to new students of Aquinas and to those familiar with the original Latin. The commentary on the text should make the translation especially suitable for use in courses on Aquinas' philosophy of human nature and theory of knowledge." -Deborah Black, University of Toronto The Treatise on the Divine Nature Translated, with Commentary, by Brian J. Shanley, O.P. "That Shanley's translation-cum-commentary can open students to such a rich appropriation of Aquinas explains why I call it 'superb.'" -David Burrell, The Thomist Disputed Questions on Virtue Translated by Jeffrey Hause and Claudia Eisen Murphy; Commentary by Jeffrey Hause "Hause and Murphy are to be congratulated. [Their volume's] strong points are numerous and important. The translation is clear and faithful. . . . Hause offers an extended commentary which is solid and helpful for beginning readers. . . . A gem." -R. E. Houser, Notre Dame Philosophical Reviews