The Triumph of the Amateurs 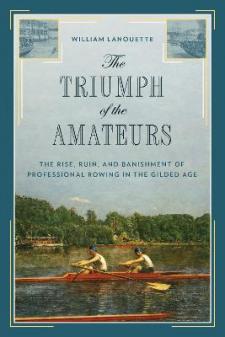 The Triumph of the Amateurs is the story of the lost world or professional rowing in America, a sport that attracted crowds of thousands, widespread betting, and ultimately corruption that foretold its doom. It centers on the colorful careers of two New York City Irish boys, the Biglin brothers John and Barney, now long forgotten save for Thomas Eakins lovely portraits of them in their scull. If the bestseller The Boys in the Boat portrayed the good guys of the U.S.'s 1936 Olympic crew, the Biglins were the Bad Boys in the Boat. Rascals abounded on and off the water, where rowdy fans often outdid modern soccer thugs in violence, betting was rampant-as was fixing-and spectators in the tens of thousands came out to see it all. Racing to Oblivion traces the sport from its rise in the years before the Civil War on through the Gilded Age to its scandalous demise and eventual transition into a purely college amateur sport. In addition Barney Biglin's later career as holder of sinecures offers a colorful glimpse into late 19th-century New York City political corruption. Illustrated with 40 black and white and color illustrations, including Thomas Eakins famous paintings of the Biglin brothers rowing on the Schuylkill River in Philadelphia in 1873.