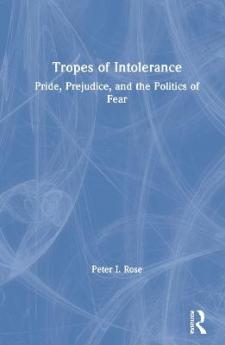 Tropes of Intolerance is a Baedeker of bigotry, a short course on xenophobic racism and populist nationalism - both enduring threats to the social fabric of democratic societies.

Each chapter is a self-contained commentary and a building block. In the first, the author considers the concepts of pride and prejudice and discusses patterns of discrimination and strategies of resistance. This is following by an illustrated consideration of the emblems of enmity - words, signs, symbols and other verbal and visual expressions of both chauvinism and intolerance. Linking the first two, the third chapter explores the nature of American Nativism and its contemporary expression. This is followed by an assessment of the exploitation of anxiety among particularly vulnerable sectors of society by skillful, manipulative leaders and their agents and the exacerbation of social divisions by the use of stereotyping, stigmatizing, and labeling. Chapter Five, "Trumped Up," narrows the focus to the present day, the president himself, and his exacerbation of polarizing particularism. A sixth chapter examines two of the most malignant ideologies -- resurgent anti-Semitism and the rise of Islamophobia -- bringing readers full circle. In addition to a brief Coda and a glossary of key terms related to the principal topic, there is a post-election Afterword written in late November, 2020.