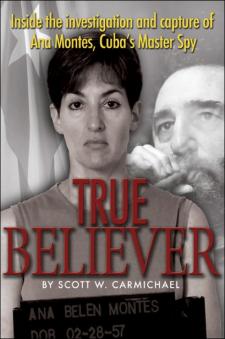 Ana Montes appeared to be a model employee of the Defense Intelligence Agency (DIA). Known to her coworkers as the Queen of Cuba, she was an overachiever who advanced quickly through the ranks of Latin American specialists to become the intelligence community's top analyst on Cuban affairs. But throughout her sixteen-year career at DIA, Montes sent Castro some of America's most closely guarded secrets and at the same time influenced what the United States thought it knew about Cuba. When she was finally arrested in September 2001, she became the most senior American intelligence official ever accused of operating as a Cuban spy from within the federal government. Unrepentant as she serves out her time in a federal prison in Texas, Montes remains the only member of the intelligence community ever convicted of espionage on behalf of the Cuban government. This inside account of the investigation that led to her arrest was written by Scott W. Carmichael, the DIA's senior counterintelligence investigator who persuaded the FBI to delve deeper into Montes activities. Although Montes did not fit the FBI's profile of a spy and easily managed to defeat the agency's polygraph exam, Carmichael became suspicious of her activities and, with the FBI, over a period of several years developed a solid case against her. Here he tells the story of that long and ultimately successful spy hunt. Carmichael reveals the details of their efforts to bring her to justice, offering readers a front-row seat for the first major U.S. espionage case of the twenty-first century. She was arrested less than twenty-four hours before learning details of the U.S. plan to invade Afghanistan post-September 11. Motivated by ideology and not money, Montes was one of the last "true believers" of the Communist era. Because her arrest came just ten days after 9/11, it went largely unnoticed by the American public. This book calls attention to the grave damage Montes inflicted on U.S. security--Carmichael even implicates her in the death of a Green Beret fighting Cuban-backed insurgent in El Salvador and the damage she would have continued to inflict had she not been caught.